Based on an original concept by David Webber, and incorporating imagery reflective of UPEI’s founding institutions—St. Dunstan’s University and Prince of Wales College—UPEI’s coat of arms was developed over the course of several years through the combined efforts of the University and the Canadian Heraldic Authority (Rideau Hall, Ottawa). UPEI was granted official Armorial Bearings by the Canadian Heraldic Authority on March 15, 2010. Unveiled and presented on Founders’ Day, September 24, 2010, the original hand-painted and hand-lettered Grant of Arms (Armorial Bearings) document (which includes our coat of arms, flag, crest, and motto) is held in the University archives. A duplicate document is displayed in the lobby of the Robertson Library. UPEI’s coat of arms is an historically relevant representation of our institution—recognizing our founding institutions, demonstrating where we came from and who we have become, and stating, in Latin, “FIDES SCIENTIA BENEFICIUM” our motto expressing UPEI’s core values of “Faith, Knowledge, Service”. 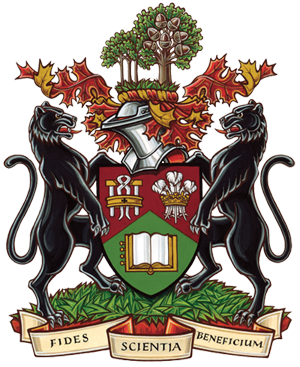 A coat of arms is centred on a shield and may be displayed with a helmet, mantling, a crest and a motto. A grant of supporters is limited to corporate bodies and to some individuals in specific categories (pictured below, the coat of arms of the University of Prince Edward Island). 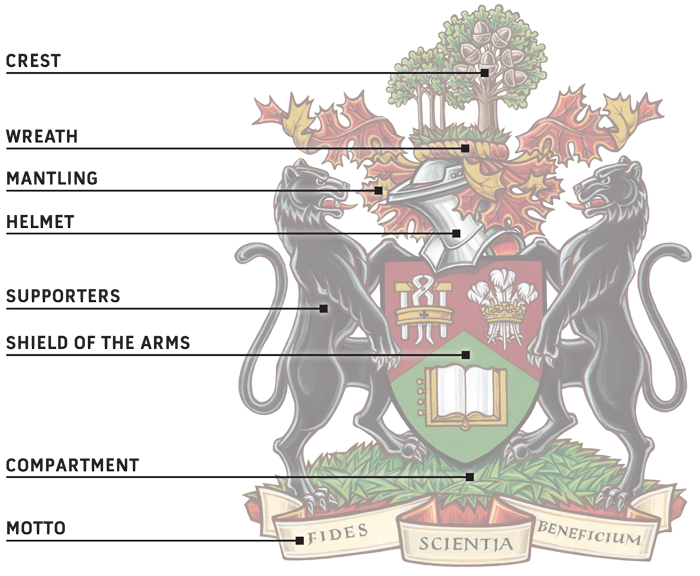 The following paragraphs explain the “Symbolism of the Armorial Bearings of the University of Prince Edward Island” as granted by Claire Boudreau, Chief Herald of Canada, Canadian Heraldic Authority, on March 15, 2010 and entered in Volume V, page 503 of the Public Register of Arms, Flags and Badges of Canada.

Arms (shield): The shield is divided in two, rust above and green below, by an angled (chevron) line, pointing to the top at the centre. In the top left is a pair of white blacksmith’s tongs flanked by two blacksmith’s hammers, their shafts white and their heads gold. Around the centres of these three vertical items is a gold ring set with one cross. In the top right are three vertical white ostrich feathers with a gold coronet of crosses patee and fleur-de-lis. In the lower part of the shield is an open white book with gold edging and binding.

The technical description of the shield follows (in blazon, the language of heraldry):

Per chevron Gules and Vert, in dexter chief a pair of blacksmith’s tongs Argent between two hammers Or hafted Argent enfiling a ring Or its cross Sable, in sinister chief three feathers Argent enfiling a coronet of crosses pattee and fleur-de-lis Or, in base an open book Argent edged and bound Or.

The rust, green, and gold colours within the shield are those of the University. The book emphasizes the University’s role as an institution of higher learning. The other symbols represent UPEI’s founding institutions—St. Dunstan’s University and Prince of Wales College. St. Dunstan, the patron of Charlottetown, is also the patron of blacksmiths, and one of his attributes is the blacksmith’s tongs, which appeared on the emblem of St. Dunstan’s University, and with a blacksmith’s hammer in the previous emblem of the University of Prince Edward Island. Here they appear within a bishop’s ring. (St. Dunstan was Archbishop of Canterbury.) The coronet with the three feathers is the badge of the heir apparent, who is generally also given the title Prince of Wales. Its use here is by special permission of HRH The Prince of Wales.

Crest: The oak tree and oak saplings are from the coat of arms of the province of Prince Edward Island, dating from 1905. They also appear on provincial great seals dating back to 1769.

Supporters: The black panthers represent the University’s varsity sports teams, the UPEI Panthers. The base on which they stand indicates the campus of the University, set on the distinctive red soil of the province.

Original concept: By David Webber, modified by Bruce Patterson, Saint-Laurent Herald, assisted by the heralds of the Canadian Heraldic Authority, in consultation with the University of Prince Edward Island.