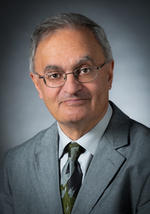 Conductor, clarinetist, educator Karem J Simon has been a member of the UPEI Department of Music Faculty since 1991. He is known as a passionate and sensitive musician, able to inspire players and musicians of diverse backgrounds. His philosophies and methodologies have been forged through his thirty-seven years of public school and university teaching, and synthesized through his experiences and studies with some of the leading wind band conductors – John Paynter, Eugene Corporon, Dale Lonis, Michael Haithcock, Craig Kirchoff among them. In 2001 Dr. Simon was recipient of the Association of Atlantic University’s Teaching Excellence Award for Instructional Leadership. Prior to his appointment at UPEI, Dr. Simon worked for ten years in Corner Brook, Newfoundland school system. He holds a Doctor of Music Degree from the University of British Columbia, a Masters Degree from Northwestern University, and Bachelor Degrees in Music and Education from Mount Allison University.

Under his direction the UPEI Wind Symphony has produced nineteen CDs and has been acclaimed for its performance standard and progressive approach to programming. He is constantly seeking collaborations with others to provide unique platforms to showcase the Wind Symphony. Performances at St. Dunstan’s Basilica, Zion Presbyterian, and Park Royal Churches in recent years have been met with capacity audiences. In addition, the Wind Symphony has collaborated in performance with most of the Island’s School Band programmes.

Conducting engagements with The PEI Symphony Orchestra, the National Youth Band of Canada, and a variety of provincial Honour Bands highlight his career. In addition, he is very active as a clarinetist in solo, chamber, and symphonic roles. Dr. Simon has been a guest artist with the Prince Edward Island Symphony, the Saint John String Quartet, Gros Morne Summer Music, the Atlantic String Machine and the International Clarinet Association’s ClarinetFest. As a member of eklektikos, he has been involved with the premieres of contemporary chamber music.