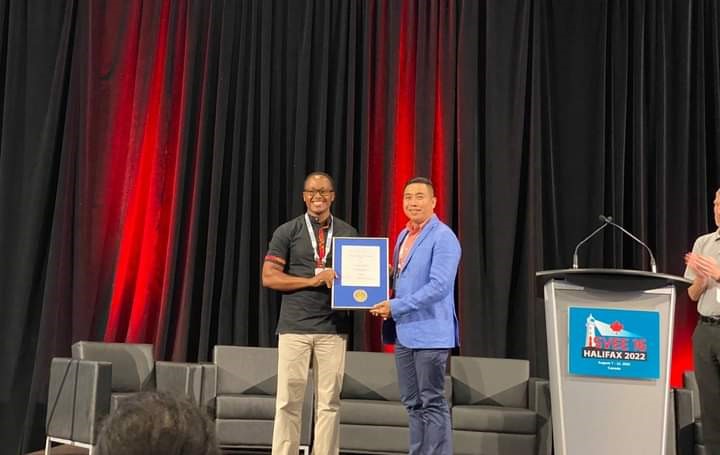 The award is given to an individual who is early in their career and demonstrates evidence for high potential based on achievements so far in veterinary epidemiology and economics. To be eligible for this award the recipient must have obtained their doctor of philosophy degree (PhD) within five years of the nomination deadline.  The award winner receives a medal and a contribution to the recipient’s travel to ISVEE.

Makau received his bachelor of veterinary sciences from the University of Nairobi (UoN) in 2012. After working in a clinical setting for a year, he returned to UoN to obtain a masters in veterinary epidemiology and economics. In 2014, he was hired as a program officer for Africa Network for Animal Welfare where his talents were quickly identified, and he became director of programs that same year.

In 2015, Makau’s curious mind motivated him to pursue additional graduate training, and he began pursuing his PhD at the Atlantic Veterinary College (AVC) at the University of Prince Edward Island (UPEI) under the supervision of Dr. John VanLeeuwen, current interim dean, AVC.

At AVC, Makau earned a Canadian Queen Elizabeth II Diamond Jubilee Scholarship (QES) and completed his thesis entitled, “Enhancing productivity and livelihoods of smallholder dairy farmers in Kenya through agroforestry and cellphone-mediated training”. During his studies, he published six peer-reviewed papers from his PhD studies in Kenya and co-authored four peer-reviewed papers with other QES-funded graduate students. In 2019, Makau received the Governor General’s Medal (Graduate) at UPEI’s convocation.

“Dr. Makau was one of the most exceptional students I have ever supervised,” says Dr. VanLeeuwen. “Being part of his academic journey was an honour.”

Now, Makau is a postdoctoral researcher under the supervision of Dr. Kim VanderWaal at the Department of Veterinary Medicine at the University of Minnesota where he employs molecular tools and One Health concepts. His current research focuses on the epidemiology of porcine respiratory and reproductive syndrome virus, anti-microbial resistance in animal populations, and contact networks for animal movements.

“Dr. Makau continues to make impressive impacts wherever his research takes him,” says Dr. VanLeeuwen. “He is a remarkable young epidemiologist, and we are proud to call him one of our alumni.”