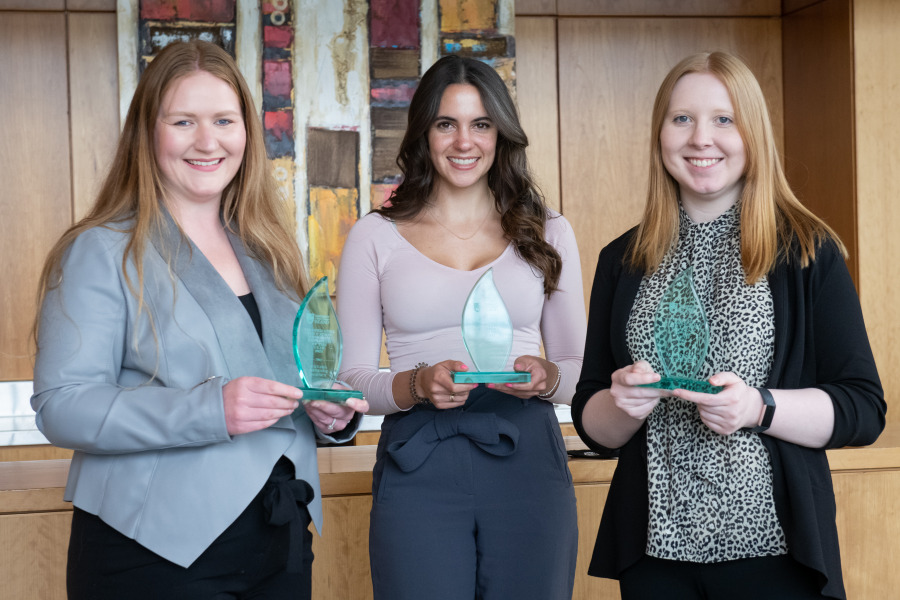 Buraimoh (BA’22) was nominated for her work term with the Population Growth Division in the Government of PEI’s Department of Economic Growth, Tourism, and Culture. She embraced learning opportunities, tackling new-to-her high-priority tasks such as developing a draft of the department’s 2019–2020 annual report. Buraimoh was recognized for her strong work ethic, positive attitude, and relationship-building skills.

“As an economics student, it was important for me to work where I could apply what I learned in my classes to a real-life scenario, conduct research, and develop sustainable solutions on various community and global issues. My passion is to serve the public—to be in the arena of public policy, to have the opportunity to solve problems for our country, to be in a position where I can make a difference.”

Wright (BBA'22) was nominated by her employer, Bradley Handrahan Chartered Professional Accountants, for meeting performance benchmarks of an experienced preparer as a student employee. Her employer also praised her for her interpersonal strengths, describing her as bright, friendly, and a pleasure to be around.

“I learned so much in my time with Bradley Handrahan that has prepared me for my future as an accounting professional. Bradley Handrahan believed in my abilities and exposed me to as many aspects of the firm as they could. With all these beneficial impacts from my experience in the co-op program, I succeeded in my senior level accounting courses, which I credit to the knowledge and skills I earned at Bradley Handrahan.”

Toop (BSc’23) was nominated by her work-term employer, iWave. Having proven her abilities in initial projects, she was challenged with a project that required her to work with technologies new to her. She investigated several options and provided solutions, a proof of concept, test cases, and comprehensive documentation on the work she had done. As a result of her efforts, iWave discovered several areas in their system to directly apply the findings. In addition to her technical performance, Toop was recognized for her excellent communication skills, which allowed her to work efficiently with the team as well as independently.

“Over the eight or nine months I spent at iWave as a student developer, I was provided with interesting and challenging projects with languages and tools I had the opportunity to learn on the job. I absorbed at least three new programming languages, two new frameworks, and so much more. I now find myself in my classes identifying material that I have already learned and worked with. I also learned the importance of team spirit and generosity with time and talent.”

After spending three work terms at the CRA’s Summerside office, Md. Shakhawath Chowdhury (BBA’22) nominated the agency for Co-op Employer of the Year. He praised the CRA for its culture, diversity, and openness to discussing career and performance feedback. Continuing with CRA following his graduation, Chowdhury acknowledged the benefits to students and new professionals of working at the agency, including the potential for bridging into a full-time role, salary and benefits, and support for learning within the organization.