Public invited to launch of books about tourism and L.M. Montgomery at UPEI on June 21 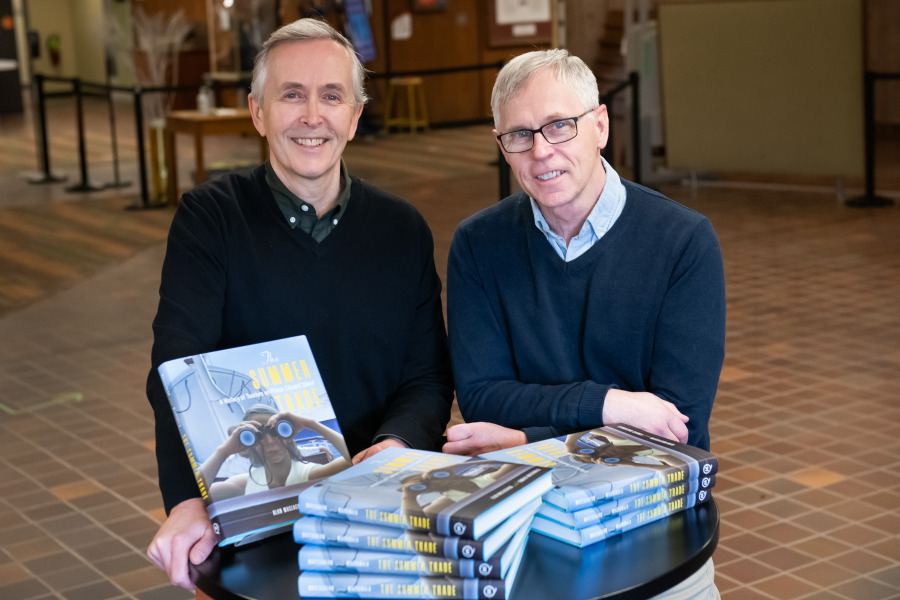 Members of the public are invited to attend the launch of two books, one a history of tourism on PEI and the other related to the Island’s famous author L.M. Montgomery, on Tuesday, June 21, at 7 pm, at the Faculty Lounge, SDU Main Building, University of Prince Edward Island.

The Summer Trade: A History of Tourism on Prince Edward Island, written by Dr. Edward MacDonald and Dr. Alan MacEachern, tracks the evolution of tourism on PEI from its beginning in the nineteenth century to the COVID-19 pandemic. The book cover summary is as follows:

“Tourism has been a central part of Prince Edward Island’s identity for more than a century. What began as a seasonal sideline in the nineteenth century evolved into an economic powerhouse that now attracts over 1.5 million visitors each year, employs one in ten Islanders, and is the province’s second leading industry.

“Spanning from the Victorian era to the COVID-19 pandemic, The Summer Trade presents the first comprehensive history of tourism in any Canadian province. Over time, the Island has marketed a remarkably durable set of tourism tropes—seaside refuge from urban industrial angst, return to innocence, literary shrine to L.M. Montgomery, cradle of Confederation, garden of the Gulf. As private enterprise and the state sought to manage the industry, the Island’s own identity became caught up in the wish fulfillment of its summer visitors. The result has been a complicated, sometimes conflicted relationship between Islanders and tourism, between a warm welcome to visitors and resistance to the industry’s adverse effects on local culture.

In conjunction with the book, an exhibition titled The Summer Trade is on display at the Confederation Centre Art Gallery. Curated by MacDonald and MacEachern, the exhibition includes the much-loved Mrs. Henrietta Sleepy Owl from Rainbow Valley, a popular PEI amusement park that delighted visitors from 1969 to 2005; original doors from the Abegweit ferry, which transported people and goods to and from PEI from 1947 to 1982; and many other artifacts.

Also being launched is L.M. Montgomery and Gender, a new addition to the body of scholarly work about the famous author. Edited by Dr. Holly Pike and Dr. Laura Robinson, the book includes essays by 19 contributors on a variety of topics “from historical analyses of the White Feather campaign and discussions of adoption to medical discourses of death and disease, explorations of Montgomery’s use of humour, and the author’s rewriting of masculinist traditions.”

The cover summary goes on to say: “The essays span Montgomery’s writing, exploring her famous Anne and Emily books as well as her short fiction, her comic journal composed with her friend Nora Lefurgey, and less-studied novels such as Magic for Marigold and The Blue Castle. Dividing the chapters into five sections—on masculinities and femininities, domestic space, humour, intertexts, and being in time—L.M. Montgomery and Gender addresses the degree to which Montgomery’s work engages and exposes, reflects and challenges the gender roles around her, underscoring how her writing has shaped future representations of gender. Of interest to historians, feminists, gender scholars, scholars of literature, and Montgomery enthusiasts, this wide-ranging collection builds on the depth of current scholarship in its approach to the complexity of gender in the works of one of Canada’s best-loved authors.”

MacDonald is a professor of history at UPEI and co-editor of several collections about the environmental history of Atlantic Canada. MacEachern is a professor of history at Western University and has written widely about Canadian environmental history. He is also Visiting Scholar at the L.M. Montgomery Institute (LMMI) at UPEI and co-chair of the Institute’s 15th biennial international conference, which will take place at UPEI from June 22 to 26.

The launch is sponsored by McGill-Queen’s Press, which published both books, and The Bookmark.