Research ship arrives in Gulf of St. Lawrence for survey of sources of groundwater

SOURCE is a research project by the Ocean Frontier Institute 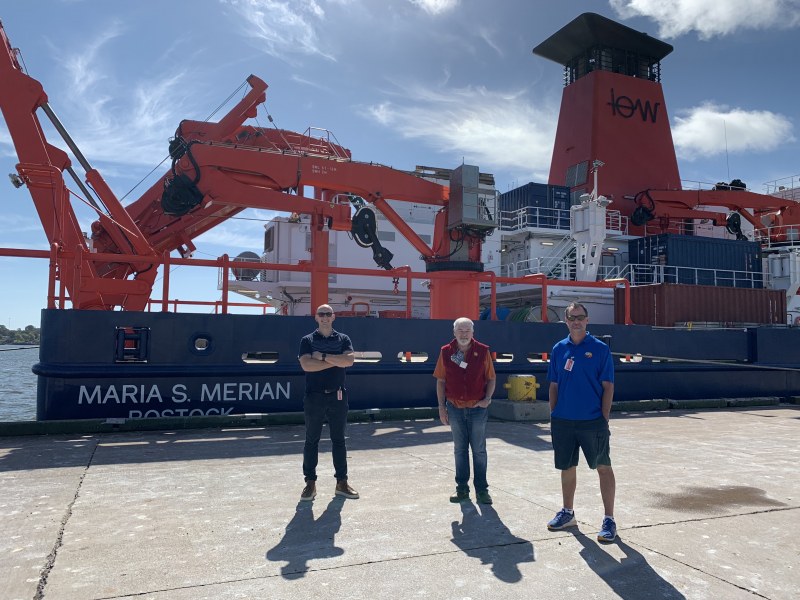 Dr. Joshua MacFadyen with Randy Angus and Craig Knickle of the Mi'kmaq Confederacy of PEI, stakeholders of the SOURCE project

The Maria S. Merian, one of the largest and most advanced research ships in the world, recently arrived in the Gulf of St. Lawrence for a survey of potential sources of undersea groundwater for Prince Edward Island. The survey, titled Offshore Groundwater Resources in a Changing Marine Environment: Continental Shelf Surrounding PEI – SOURCE, is a project of the Ocean Frontier Institute, led by Dalhousie University’s Dr. Vittorio Maselli, Canada Research Chair in Coastal Zone Processes, in collaboration with a team of researchers including UPEI’s Dr. Joshua MacFadyen, Canada Research Chair in Geospatial Humanities.

The Ocean Frontier Institute’s website describes the mission of this project:

Prince Edward Island is 100% dependent on groundwater for both irrigation and drinking, but this resource has faced compounding stresses in recent years due to the extensive agricultural industry and the impacts of climate change. Freshwater offshore aquifers located beneath the seafloor may represent a new and critical water resource for PEI.

The project brings together an internationally renowned and multidisciplinary research team to test the hypothesis that offshore aquifers are hosted in fractured consolidated clastic sediments, and that the dynamics of the Laurentide Ice Sheet during the last glacial-interglacial cycle(s) contributed to their recharge. Using state-of-the-art geophysical, oceanographic, and geochemical equipment, the team will focus on the continental shelf surrounding PEI to discover and map offshore freshwater aquifers. The new data will be used to understand how these aquifers evolve in response to water extraction and changes in climate and coastal environments. By providing estimates of offshore groundwater quality and quantity, this project will have a direct application for future sustainable development of PEI and other island and marine coastal settings worldwide.

Dr. MacFadyen’s position is unique within this project. He will consult with stakeholders, discuss the benefits and concerns to Islanders, and help communicate the knowledge produced by the project to a larger audience.

The survey continues through the fall.

The Ocean Frontier Institute (OFI) was established in September 2016 through a partnership led by Dalhousie University, Memorial University, and the University of Prince Edward Island. Created by an investment from the Government of Canada’s Canada First Research Excellence Fund (CFREF) and various private and public-sector organizations, OFI is an international hub for ocean research, bringing together experts from both sides of the North Atlantic to explore the vast potential of the ocean.