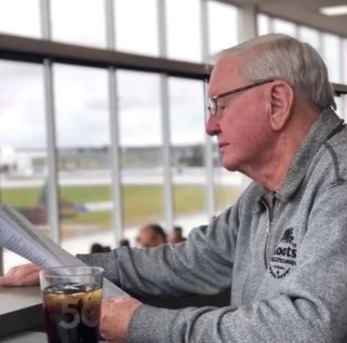 Billy Mulligan was not only passionate about the UPEI Panthers, but also was a big harness racing fan as seen here at Red Shores Racetrack

The UPEI community was saddened to hear about the passing of SDU alumnus William “Billy” Mulligan, who died on June 25 at the age of 81 in Saint John, NB, after suffering heart complications.

Mulligan was an instrumental supporter of the UPEI Panthers, in particular the men’s hockey team, and had been a star athlete himself when he played for the Saint Dunstan’s University Saints. In 1962–63, Mulligan led the team to a fourth-place finish in the nine-team Maritime Intercollegiate League. He played centre on the line that led in scoring, and was selected as the league all-star.

UPEI Men's Hockey recognized Mulligan as a hockey program builder during a special ceremony prior to the Panthers’ final regular season home game in 2014. Honoured for his devotion and dedication to the promotion of the UPEI men’s hockey program, he was the driving force behind fundraising events and booster club activities.

Mulligan was active in many other volunteer activities involving sport throughout the province. He coached and organized minor football and hockey, contributing many hours to Charlottetown Minor Hockey, Colonel Gray High School, Prince of Wales College, and various senior hockey leagues. In addition to his tireless work supporting UPEI, he organized numerous golf tournaments and other fundraisers for the Charlottetown Boys and Girls Club, KidSport, and many other sports organizations.

UPEI sends sincere condolences to Billy Mulligan’s wife Georgina, daughters Kelly and Allison, and brother Vince, and his family and friends. He will be greatly missed.