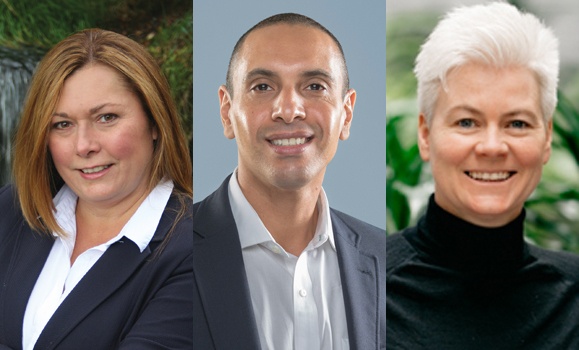 Dawn Chafe, the executive editor of Atlantic Business Magazine, Tarek Mady, interim dean of the UPEI Faculty of Business, and Kim Brooks, dean of the Faculty of Management at Dalhousie University

UPEI has formed a partnership with 10 other Atlantic Canadian universities and Atlantic Business Magazine with a goal of making the region’s business schools and business community more inclusive.

The Atlantic Promise Scholars initiative is increasing diversity in business schools by offering Black and Indigenous students financial aid and other supports to ensure their success.

“We know that access to a post-secondary education is transformative. It should be accessible to all promising students,” says Kim Brooks, dean of the Faculty of Management at Dalhousie University.

The idea was born last summer when Dalhousie’s management students challenged the faculty to do more to support equity, diversity and inclusion. In response, the faculty created the Promise Scholars program to recruit, retain, support and graduate more Black and Indigenous students by offering financial aid and wraparound supports like mentorship and work-integrated learning opportunities in all of the faculty’s graduate and undergraduate programs.

Now, the Promise Scholars program has evolved into the Atlantic Promise Scholars Initiative. Rather than go it alone, Dalhousie reached out to Atlantic Business Magazine and the region’s other business schools, suggesting a partnership. They were all enthusiastic to work together.

“We are currently in discussions with leaders from the local communities who offer invaluable insights into the needs of these communities. This collaborative approach, rooted in our genuine desire to listen to and learn from the community, is at the heart of all we intend to do,” says Tarek Mady, Interim Dean of the UPEI Faculty of Business.

Mady says the end goal is to create and deliver truly impactful programs for students from these communities in the form of financial aid/scholarships, mentoring opportunities, board training, and other kinds of holistic support that will not only benefit specific students, “but also support our mandate to enhance equity, diversity, and inclusion in business schools and beyond.”

Atlantic Business Magazine sees this as an important initiative to support.

“We’ve proudly partnered with university business schools across Atlantic Canada to promote Promise Scholars. It’s an exciting initiative and of course we want to help it, and ultimately businesses in Atlantic Canada, to grow and thrive,” says Dawn Chafe, the executive editor of Atlantic Business Magazine. Chafe is asking all of the magazine’s honoured Top 50 CEOs past and present to support the Promise Scholars Initiative at the participating university of their choice.

“Sending the signal that CEOs care about the pipeline of talent that’s coming… that there are specific individuals who are coming through this pipeline who are going to make a difference and be important in our communities — to me, that sends all the right messages about belonging, about how we care for each other in the Atlantic region,” says Chafe.

Brooks is thrilled that the Dal-initiated program has grown to include a media partner and 10 other universities. “This is not a project for a singular university,” says Brooks. “Our universities have excluded Black and Indigenous students and our region needs their talents.”