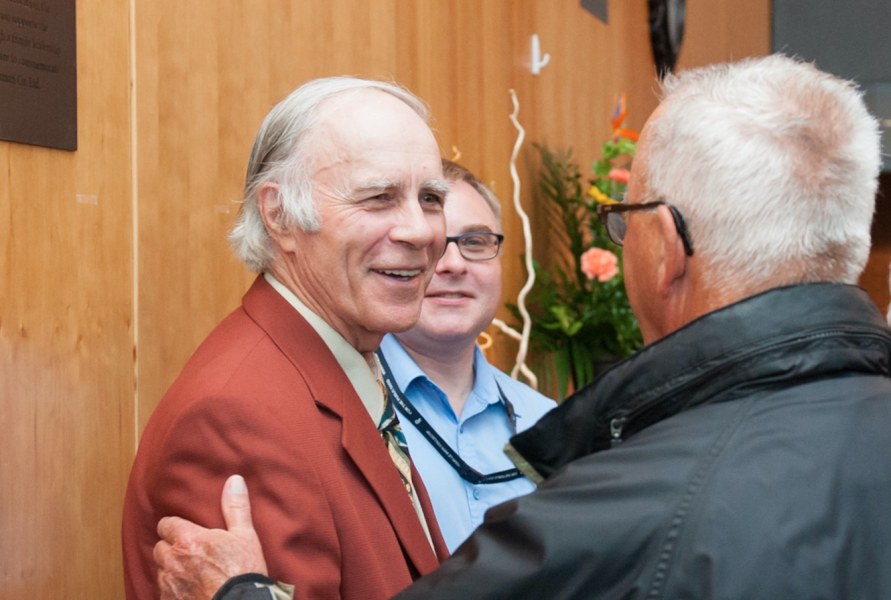 The entire University of Prince Edward Island community was saddened to learn of the passing of UPEI Founder and retired faculty member Daryl Guignion on February 8, 2021. The flags in front of the Kelley Memorial Building have been lowered to half-mast in his memory.

Mr. Guignion, along with his colleague and friend Dr. Ian MacQuarrie, were named UPEI Founders in 2018 for the impressive and significant impacts they made on ecological and wildlife conservation efforts in Prince Edward Island. Mr. Guignion taught biology courses which instilled a conservation ethic, collaborated on land use and conservation initiatives, and raised public consciousness in these areas. As a result, his legacy is the generations of students who went on to prominent positions, helping to make changes towards sustainable use of natural resources.

A number of years ago, a scholarship was established by past students, colleagues, friends, and family to honour the work of Mr. Guignion and Dr. MacQuarrie. The Daryl Guignion and Ian MacQuarrie Graduate Scholarship in Science is granted to a first-year student in a Master of Science program at UPEI who will conduct a research program focused on the ecology and status of natural habitats and/or native wildlife.

Donations in Mr. Guignion’s memory can be made to the Island Nature Trust or the Daryl Guignion and Ian MacQuarrie Graduate Scholarship in Science at UPEI. Online condolences may be made and his obituary viewed at www.macleanfh.com

From the citation at the 2018 Recognition of Founders Ceremony when Daryl Guignion was named a UPEI Founder along with his friend and colleague, Dr. Ian MacQuarrie:

A wildlife biologist, researcher, and teacher, Mr. Guignion feels a strong connection with the natural world. He grew up in a wilderness area, in what is now Quebec’s Forillon National Park, where he spent most of his childhood in the forest, rivers, and beaches. His childhood instilled in him a great respect and love for nature and inspired him to make conservation his life’s work.

Mr. Guignion is first and foremost an inspirational leader, both at UPEI and in the broader conservation community on Prince Edward Island. He has spent a lifetime working with educators, policy-makers, and community organizations to encourage more respect and protection for the natural environment.

As a faculty member in UPEI’s biology department from 1967–2008, he motivated many of his students to be conservationists and biologists. He inspired his students to view their environment through a sensitive lens that strengthens their understanding of how they are affected by the natural world, and how they are totally dependent on it.

In addition to educating university students, he has made literally hundreds of presentations to school and community groups about major threats to fragile ecosystems in the belief that one of the best ways to increase awareness and encourage change is through education.

Mr. Guignion is widely respected for his ongoing work to conserve and enhance natural areas and fish habitat. He researches wildlife and their ecosystems, and investigates factors limiting wild salmon production on Prince Edward Island. Instrumental in setting up the Island Nature Trust in 1979, a nongovernment organization dedicated to the protection and management of natural areas on PEI, he continues to work with other such groups to develop and implement watershed plans. He works closely with the West River Watershed group, particularly its project to restock the river with Atlantic salmon.

He was honoured by the UPEI Student Union in 2005 with a Faculty of the Year award, and received a “Merit Award for Excellence in Teaching” in 1994. He also received Fisheries and Oceans’ National 2 Recreational Fisheries Award in 2012 and the Prince Edward Island Environmental Award in 2000 for his individual contributions to the environment.