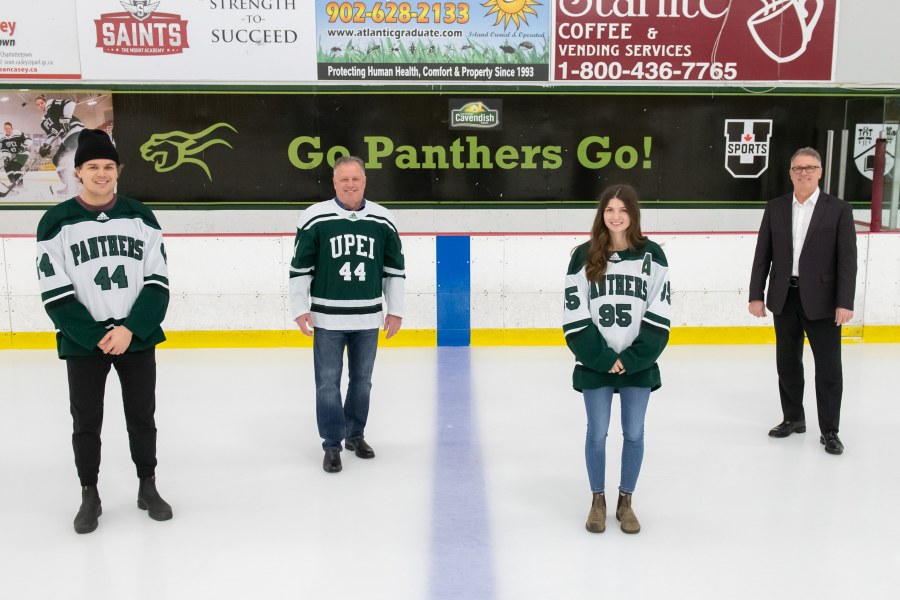 The first David Currie Jr. Panther Co-Educational Hockey Awards for Perseverance and Resolve were recently presented to Faith Steeves (UPEI Women’s Hockey) and Matt Brassard (UPEI Men’s Hockey). Both students receive $5000 for their excellence both on and off the ice.

David Currie is a proud UPEI alumnus who was an outstanding member of the UPEI men’s hockey team. His focus, determination, and resolve allowed him to pursue a university education while playing a sport he loved. Currie is an accomplished information technology sales account professional who has worked and built relationships with most of Canada’s Fortune 100 companies and the Government of Canada. In the winter of 2020, Currie and his partner, Debbie, decided to make an extraordinary contribution to UPEI’s Hockey Program through the creation of these awards. It is their intent that these awards are granted to extraordinary young hockey players of character.

“The opportunity to partner with the UPEI men’s and women’s hockey program was something I have wanted to do for a number of years and especially as they continue their program pursuit to host both a men’s and women’s national championship,” said Currie. “The program will be the beneficiary of what I say are about the chances I’ve taken the people I have met and the career I have made since leaving UPEI in 1987. I couldn’t be more grateful to the university and the program and what it taught me in my professional career.”

Faith Steeves is a Bachelor of Arts student and a forward on the UPEI women’s hockey team from Havelock, New Brunswick.

“Finding the balance between being on the ice seven days a week and having classes five days a week was very tough for me and took a toll on my play and my academics,” said Steeves. “For me, finding a balance and realizing that it was okay to ask people and teammates for help is one of the main reasons why I am still attending UPEI today and will be graduating this May.”

“Faith was highly sought after by recruiters throughout Atlantic Canada, and it was because of such great support we were able to secure her as a Panther,” said Bruce Donaldson, head coach of the UPEI women’s hockey team. “She has matured into a very personable individual who will bring a strong set of leadership skills throughout her career. These scholarships are so important for our programs. It greatly enhances our ability to recruit top student-athletes so they can focus on what's important: their academic and athletic experience.”

Matt Brassard is a Bachelor of Business Administration student and a defenceman on the UPEI men’s hockey team from Barrie, Ontario.

“Matt is a player that we targeted very aggressively in hopes of securing him as a future Panther,” said Forbes MacPherson, head coach of UPEI men’s hockey. “After Matt had an opportunity to experience professional hockey, it became apparent that he wanted to pursue his education and take advantage of scholarship opportunities. We have been very fortunate with men’s hockey over the years with scholarship contributions. With the likes of Bill LeClair, Ron McInnis, and the MacLauchlan family, these scholarships have a direct impact in recruiting top student athletes. The Currie family name is synonymous with men’s hockey at UPEI, and David’s interest and support will continue to grow that relationship.”

The recipients of the David Currie Jr. Panther Co-Educational Hockey Awards for Perseverance and Resolve are selected by the Director of Athletics and Recreation in consultation with the UPEI hockey coaches and approved by the UPEI Senate Committee on Scholarships and Awards.