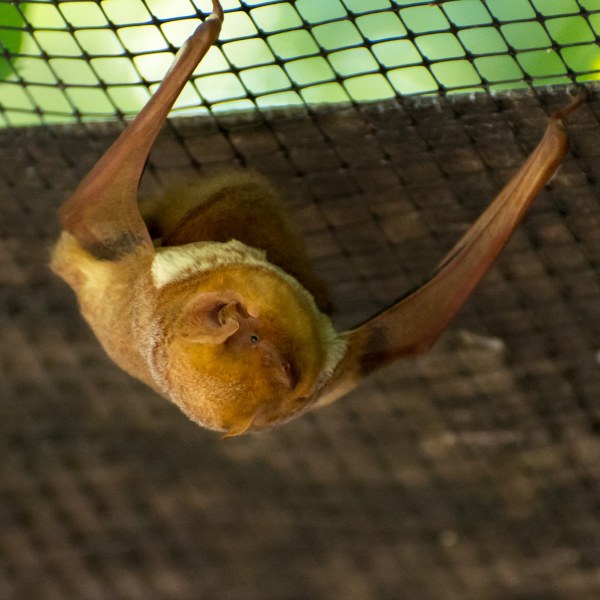 Bat populations have been under siege in recent years because of the deadly white-nose syndrome, but researchers on Prince Edward Island got some good news earlier this fall. The eastern red bat (Lasiurus borealis), a species not previously identified in the province, has been recorded in the PEI National Park.

For the past five years, the Canadian Wildlife Health Cooperative (CWHC), based at the Atlantic Veterinary College, has been helping PEI National Park species-at-risk biologists to acoustically monitor bats in the park to identify high-quality habitat, detect species, and track population trends. The little brown myotis (Myotis lucifugus) and the northern myotis (M. septentrionalis) are of particular interest because they are listed as endangered under the federal Species at Risk Act, due to population declines primarily caused by white-nose syndrome.

“The eastern red bat, like the hoary bat and the silver-haired bat, is a migratory species,” said Jordi Segers, national bat-white nose syndrome scientific program coordinator with the CWHC. “So it is not very surprising to find this species in the province, but why had it not been recorded in previous years? A close review of data from past years revealed that the eastern red bat had been recorded previously on PEI, but due to the large amounts of data and the subtlety of bat call characteristics, it had been missed.”

Monitoring bats acoustically is done by using specialized audio equipment in the bats’ habitat to record their echolocation calls, which cannot be heard by the human ear. Once the calls are recorded, they are analyzed by a computer program, which visualizes them as sonograms. By inspecting sonograms carefully and paying close attention to the bat call characteristics, the sounds can usually be attributed to a group of similar-sounding bat species and sometimes even to an individual species.

The national park’s acoustic bat monitoring program generates over 100,000 audio files each year. These files are inspected by the CWHC to determine whether they represent bat calls, and if so, which individual bat species or species group they are from. In most years, about 99 per cent of recorded bat calls are made by either of the endangered myotis species, while less than one per cent are attributed to the hoary bat (Lasiurus cinereus) or a species group that includes the silver-haired bat (Lasionycteris noctivagans) and the big brown bat (Eptesicus fuscus).

“It is very exciting to find another bat species in the PEI National Park,” said Segers. “The knowledge and understanding of the diversity of species in the park help biologists better manage and protect important habitat for, and mitigate potential threats to, the wildlife populations they oversee. The CWHC will continue to work with the PEI National Park to understand and manage local bat populations.”

Click here to read CBC PEI's story about the discovery of the eastern red bat on PEI.