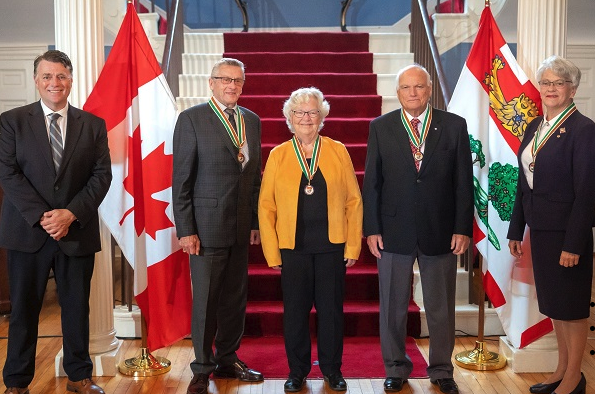 Olive Bryanton, PhD, LLD, can now add the post-nominal letters “OPEI” to her name. The octogenarian from Hampshire received the insignia of the Order of Prince Edward Island in a ceremony on September 30, 2020, at Government House in Charlottetown.

Dr. Bryanton along with Henry Purdy of Parkdale, and Bev Simpson of York, were announced as recipients by the Chancellor of the Order, Her Honour the Honourable Antoinette Perry, Lieutenant Governor of Prince Edward Island and Mr. Gerard Greenan, Chair of the Order of Prince Edward Island Advisory Council. They were selected from a total of 32 Islanders nominated to receive the award this year.

Dr. Bryanton has been an activist for seniors her whole life and is involved with various agencies, associations, and committees. She received an honorary doctor of laws degree from UPEI in 2000.

In August 2019, after receiving her PhD at May Convocation at the age of 82, Dr. Bryanton was the focus of the documentary Never Too Old  that aired on CBC TV and followed her as she worked to finish her research and defend her doctoral thesis at UPEI. Her dissertation was titled, “Pioneers in Aging: Voices of women 85 years and older aging in place in rural communities”.

Dr. Bryanton currently works with co-investigators Dr. Bill Montelpare, professor and Margaret and Wallace McCain Chair in Human Development and Health at UPEI, and Dr. Janet MacIntyre, assistant professor, Faculty of Nursing, focusing on a patient-centered, community-based program to improve the delivery and outcomes of care for older adults with Type 2 diabetes and other chronic conditions.