Learning to care for a species-at-risk 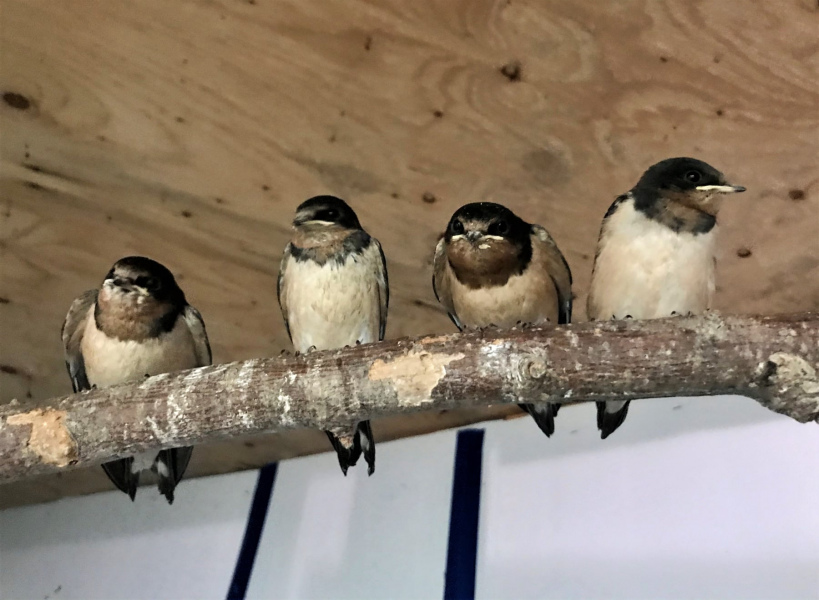 When surveying for barn swallows in PEI fishing harbours earlier this month, staff from the Island Nature Trust (INT) discovered that a pair of barn swallows had nested on a lobster boat moored in Tignish Harbour. The pair hatched four chicks, but it was determined that the chicks would not be fledged by the time the boat set sail for the fall lobster season. Concerned about their survival, INT built a temporary structure with an artificial clay nest in a safe location near the boat.

The original nest and the chicks were moved into the artificial nest. But after observing the nest most of the day, INT staff did not see the parent birds feeding their chicks. They also saw that the adults were leaving the nestlings for longer and longer periods of time. INT decided that the best way to ensure the survival of the chicks was to bring them to the AVC Wildlife Service.

The nestlings arrived at the AVC Wildlife Service on August 8th, where they were given fluids and then were fed every 20–30 minutes. Under the guidance of wildlife technician Fiep de Bie, Buzzell and Ebbott worked in shifts to manage the chicks’ care, especially the frequent feedings. At first, the chicks were fed a specially formulated liquid diet, and then they were given mostly insects, their natural food. A week later, they had all their feathers and were beginning to perch. They were moved into a larger enclosure where they could spread their wings. They continued to receive feedings—about 20 meal worms every hour for each chick.

Eleven days later, the chicks were released in a barn where an adult pair had a nest with chicks almost ready to fledge. Shortly after the “boat swallows” were released, they flew outside with the adult birds, and since then, they have been observed flying with the fledglings from the nest.

Buzzell said that caring for the young swallows was a remarkable experience. He had not worked with a protected species before, but the experience he gained working with other species in the AVC Wildlife Service prepared him to work with the chicks.

“Seeing these swallows being able to carry on with their lives following our care—and to have played a direct role in their survival—was such a treat. I am glad to have been a part of such a positive experience with this group of patients. AVC Wildlife Service does so much good for the wildlife on PEI.”

Ebbott said helping to care for the chicks provided her with valuable experience as a veterinary student.

“Working with a diverse array of species, we learn to become adaptable, utilize resources, and broaden our knowledge base and practical skills for the benefit of each patient,” she said. “Regardless of our eventual specialty, these skills are crucial to any aspect of veterinary practice and our future success as veterinarians. Being able to play a role in serving the community and helping this species at risk thrive has been an incredibly rewarding experience.”