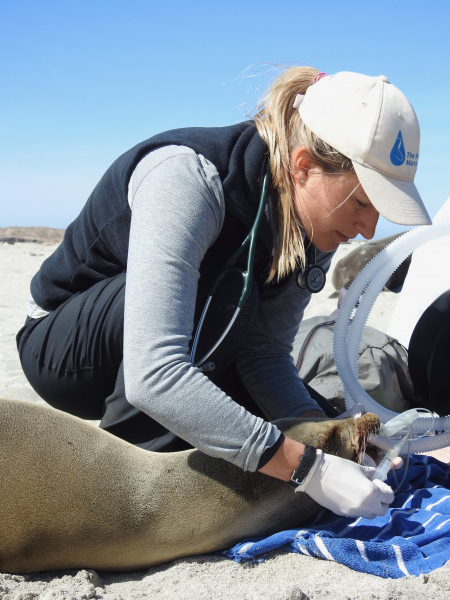 In a media release announcing Whoriskey’s appointment, the Marine Mammal Centre said that she is an emerging leader in marine mammal health issues and is passionate about translating her scientific work and research into the conservation of the endangered Hawaiian monk seal.

Originally from Nova Scotia, said the release, Whoriskey trained at the Center for two years as the marine mammal medicine and pathology intern, which provided her with a wide breadth of experience, including the clinical care of a variety of marine mammal species including endangered species, rescue and response, wildlife rehabilitation medicine, stranding investigation, wildlife behavioral and population dynamics research, public education, and animal care and welfare. Most recently she worked as a clinical veterinarian at the Marine Mammal Center and as associate veterinarian at Steinhart Aquarium at California Academy of Sciences.

She has extensive field experience, including working with threatened Guadalupe fur seals in Mexico, Weddell seal pups in Antarctica, and a variety of marine mammals in California and Alaska. She has also been a lead or co-author on a dozen scientific research papers related to her work with marine mammals and other wildlife.

The Marine Mammal Center’s Ke Kai Ola hospital is the only one in the world dedicated to Hawaiian monk seals. Researchers from the National Oceanic and Atmospheric Administration (NOAA) estimate that about 30 percent of Hawaiian monk seals are alive today due to the result of conservation efforts. The Center is the only partner organization permitted by NOAA to treat and rehabilitate endangered seals.