Skip to main content
This News Story is more than 2 years old. Links and contact information may have changed.

UPEI expresses condolences at the passing of Professor Earl Wonnacott

A wonderful teacher and mentor 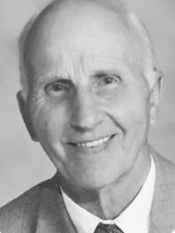 The UPEI community is saddened by the death of retired professor of physics Earl LePage Wonnacott who passed away on Friday, October 18, 2019.

A native of Prince Edward Island, Professor Wonnacott taught physics and astronomy for more than 50 years, beginning in the 1940s at Prince of Wales College and continuing when the University of Prince Edward Island was established in 1969. He began his undergraduate studies at PWC in 1942 with a break to serve his country in the Second World War. When he returned from his war service, he began teaching at PWC in 1945 but left again a year later to earn his bachelor of science degree at Acadia University. After graduating from Acadia in 1947, he again taught at PWC until 1952 when he took a year’s leave to study at Dalhousie University. He returned to PWC and continued to teach there until the creation of UPEI. He taught physics and astronomy at the new University, serving as chair of the physics department in the 1980s.

He was also instrumental in the construction of the Observatory on Memorial Hall in 1980, and he was a founding member of the Royal Astronomical Society, Charlottetown Centre. After he retired, he continued to teach astronomy at UPEI until the early 2000s.

In 1998 the Professor Earl Wonnacott Prize in Astronomy was established in his honour. In 2001 he was named a Founder of the University for his contributions to education at UPEI and province-wide.

Dr. William Whelan, chair of the physics department, remembers Professor Wonnacott as a wonderful teacher and mentor. “He had a kind and quiet manner, and his enthusiasm for physics and astronomy had a profound impact on many UPEI students, myself included.”

UPEI extends condolences to his children Brian, John, Stephen, Ruth Proud, Eric, David, and Deborah, his brother Don Wonnacott, and their families and friends. Friends and family will be received at Hennessey Cutcliffe Charlottetown Funeral Home on Wednesday, October 23, 2019, from 5:00 to 8:00 pm. A funeral will be held at Trinity United Church in Charlottetown at 10:30 am on Thursday, October 24, 2019, with a reception to follow.