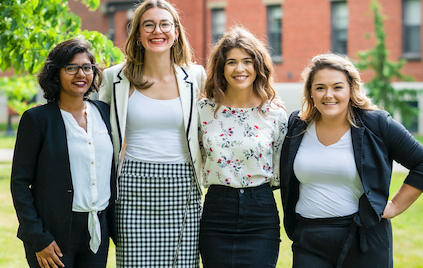 In a UPEISU news release, Drake said, “We are excited to see four women in different executive positions working together for the first time in the UPEISU. The fact that this celebration coincides with our 50th anniversary makes the occasion even more special to us.”

The UPEI Student Union, led by its first president John Keaveny, was founded in 1969, after the University Act created the University of Prince of Island. Since then, roughly 30 per cent of UPEISU executive members have been women, while the president position has been filled by a woman approximately one out of five times.

This fall, the UPEISU will offer different programs aimed at supporting students from different backgrounds who wish to get involved on campus.

“We hope this will encourage more students from diverse backgrounds to pursue leadership positions at UPEI,” added Drake.

*The PEI Famous Five references the moment in Prince Edward Island history when in 1993, women held five of the most influential positions of government. It was the first, and only, time in Canadian history that five women held these positions at the same time and included Canada's first elected woman Premier (and UPEI’s current Chancellor, the Honourable Catherine Callbeck; Lieutenant Governor, the Honourable Marion L. Reid; Leader of the Official Opposition Pat Mella; Speaker Nancy Guptill; and Deputy Speaker, the Honourable Elizabeth Hubley.