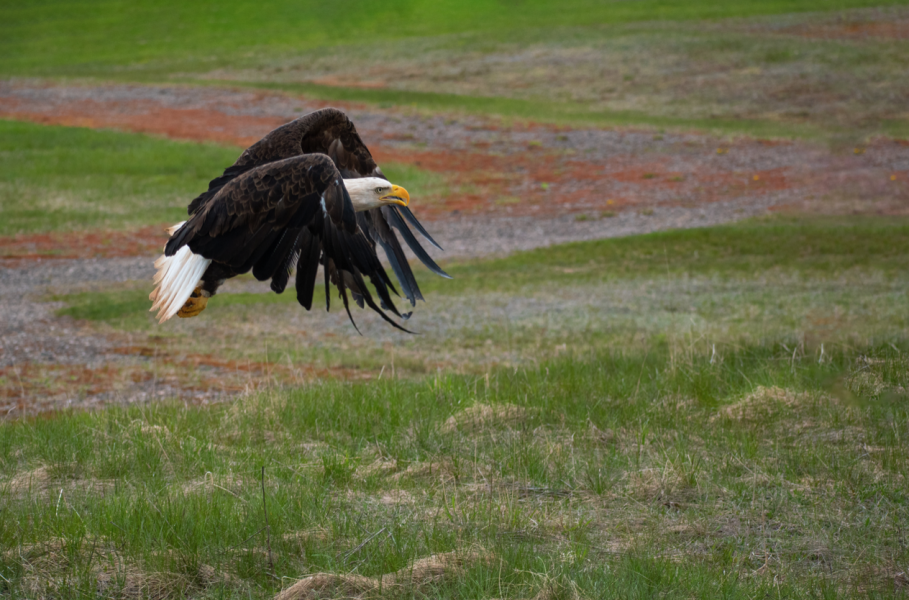 After a ten-month recovery from injury, a bald eagle was released by the AVC Wildlife Service on May 17, 2019, at the Eagle’s View Golf Course in Murray River, PEI.

The mature female eagle was found in MacLure’s Pond near the golf course on July 12, 2018, with fishing line wrapped around her right foot and left wing. She was rescued from the water by Fish and Wildlife staff and brought to the AVC Wildlife Service.

A physical examination revealed that her left elbow was swollen, and she had a full tissue tear in the web of her right wing. The wound was sutured by Dr. Dave McRuer, wildlife health specialist; for several weeks following, wound care was provided and the wing bandaged. On the first day without a bandage, the wound opened along the suture line and needed to be repaired again. This meant another round of bandage changes and physiotherapy every three days to keep her wing mobile. Additionally, Dr. Art Ortenburger, Associate Professor, Large Animal Surgery and Integrative Medicine, provided cold-laser therapy sessions to promote wound healing. Finally, after weeks of bandage changes and wound care, the eagle was placed in an outdoor enclosure to slowly exercise her wing.

In October, she was taken to Cobequid Wildlife Rehabilitation Centre, Brookfield, Nova Scotia, for further rehabilitation and flight practice, where she started flying laps in the Centre’s large oval flight cage. A headstrong and feisty eagle, she dominated the other eagles in the flyway.

After being released from her crate on Friday, the eagle flew off into the distance. About 20 minutes later, she reappeared, circling high above the people who had gathered for her release. They recognized her from her missing primary feathers. It was a magical moment!